The government has no papers, fewer meetings socially 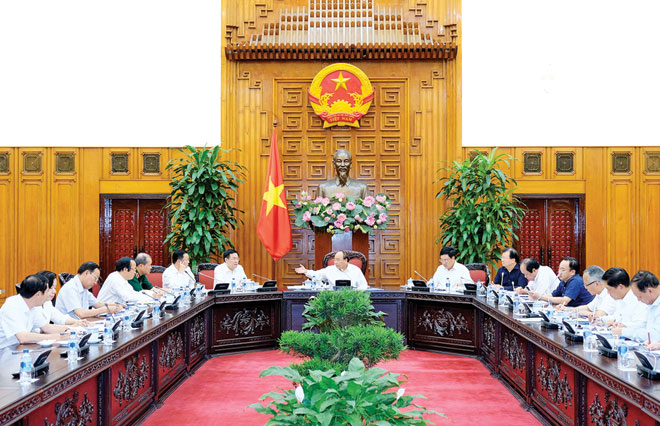 The Prime Minister of the Government Office Mai Tien Dung: It is true that we now meet too much. Not only the government, but also the ministries, branches and places. Even the reports for executive leadership, for meetings too big. The number of reports from the following years in comparison with the previous year is increasing.

In recent years, the government office has also advised the prime minister on the establishment of the government center to reduce the number of meetings and reduce unnecessary reports. If we have a data center, there is an operating room, all reports go online. We simply press the button on the device and all indicators are visible.

At present, the Government Office is the leading model in the application of information technology, the processing of electronic documents, the implementation of non-paper offices, aimed at non-paper government. It is expected that on 1 January 1976 the government office will invite the Prime Minister to press the national link, which will connect all ministries, sectors and places and there will be data exchange between the agency.

In Estonia, for example, the previous government usually lasted between four and five hours. But now the application of information technology, government number, meeting time is only about 30 minutes. Ministers and members of the government regularly use and process information and documents online, until the meetings only discuss and vote on important issues. It is a very good experience for us to set up a paperless government.

In fact, the construction of e-government has been set up and implemented for decades, but things are almost "still in place". Is this something else? It is true that e-government has existed for almost 20 years. This has also produced initial performance. But in general the results are still very limited. The core elements of e-government construction have not been achieved much. Even the problem of changing the rules, reforms in the system of government agencies also reaches very modest.

This time, with the prime minister's determination to take government-created government measures, the government focused on serving the people and businesses, so the construction of e-government, non-public government, less The meeting will fundamentally change . For example, the implementation of the premier's instruction, the Government Office will be the highest state administrative agency should take the lead in the implementation. The government office also carries out non-paper targets, the full use of document management and work-based electronic records. People, companies, functional bodies do not have to meet, it is not necessary to come. When it was issued, the document came immediately instead of the phone to notify it to get the document.

So what are the biggest obstacles to using e-government and how do we overcome that, sir?

The biggest problem is human thinking. Many people on duty do not want to leave the "right" to solve administrative paperwork. Because of the document there is a direct meeting, so it is easy to lead to intimidation, negativity, especially issues related to companies and people, such as procedures for issuing certificates of land use rights, construction …

But with modern administration and smart management, we do not accept it. We have to implement the solutions in a synchronized way. There will be a road map to regulate the use of paperwork. Thus, if the cadres and officials do not meet the requirements of the task will be immediately transferred to another task.

One of the expectations when implementing e-government is to reduce corruption, negativity and problems for people. So what mechanism is there to limit these negative effects, Minister?

It can be said that the establishment of e-government is related to the administrative reform of the government. In the past period, the Prime Minister has been very vigorously reformed in the government bodies of the state. This is the main priority of the government. If we do well to build e-government, the non-public government will create publicity, transparency, negative repression and corruption. Because people do not have to meet each other, regardless of who has solved the administrative procedures, the situation of intimidation, negative, will avoid.

But as I said, to do it, we must change our perception. In the first place, instead of traditional paperwork, electronic records transform into digital. All job processing will be digitized, which will create favorable conditions, a clean environment, cost savings, negative consequences and corruption in the execution of the service. If we do that, this will result in huge costs for society, the costs of the people. All issues are public, transparent, with the supervision of people, and thereby contribute to rejection negative, corruption. For example, how often a house is transferred, the price of each transfer is public, is updated on the network.

"Having papers is a direct meeting, it is easy to lead to intimidation, negative, especially issues related to companies and people, such as procedures for granting certificates of land use, construction … But with modern administration and smart management, we do not accept it, we have to go with the solutions, with a specific roadmap for not using paper. "

The Prime Minister of the government office Mai Tien Dung