The trillion project with Trinh Xuan Thanh was proposed for revocation 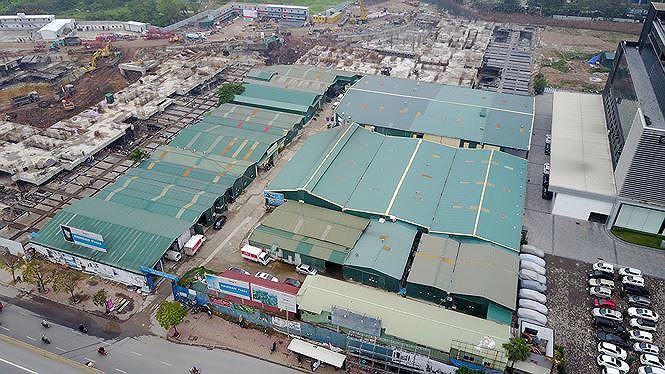 People Council of Hanoi has 57 / BC – People & # 39; s Council reported on the results of monitoring Hanoi People's Council on the management of off-budget projects using slowly implemented land that violates the Constitution. in the city.

According to the newspaper, around 21 from the Nam Du Lien district, Nam Dinh Ward, My Dinh 1) are owned by PetroVietnam Real Estate Joint Stock Company.

Based on the legal basis and the project implementation process, the City People's Committee issued Decision No 7100 / QD-UB on 18 October 2002 for the restoration of 9,584 m2 of land in My Dinh district, Tu Liem district (now My Dinh 1 ward, Nam Tu Liem district) for rent at Pacific Trans Pacific Limited Company.

As of November 9, 2006, the City People's Committee has issued document No. 5221 / UBND-KHDT, allowing the Trans Pacific Limited Company to convert its goal to use 9,584 m² of land to build the funeral home. civilized to build a 5-star hotel.

Through the survey at the Nam Dan Plaza project, the current status of the project area to empty land, surrounding walls and some temporary works inside.

In this respect, the Department of Natural Resources and Environment reported that the Department inspected Decision No. 622 / KL-STNMT of April 8, 2014 and issued the City People & # 39; s Committee on No. 7422 / UBND on 25/14 / 2014 The construction department inspects and handles building permits for Trans Pacific Pacific.

Recently, in Announcement No. 18 / TB-HDND on the Permanent Conclusion of the City Council, the explanation of the management of off-budget projects with slow land use is in conflict with the Land Act. city ​​council, the People's Council of Hanoi also proposed that the City People's Committee be widely publicized on the mass media list of 47 qualified projects to recover in the coming period.

According to PV, the Nam Dan Plaza project has a top location, located on the E2.1 block of nearly 10,000 m2, on the Pham Hung street, near the Keangnam building.

It is advertised as a five-star hotel complex, commercial center, finance, banking, entertainment, office … The project has been "immobile" for years. The owners of the Nam Dan Plaza project were entangled in the labor camp.

Le Hoa Binh, chairman of the 1/5 Joint Stock Company, a major shareholder in the Nam Dan Plaza project, was arrested in a short sale in the Thanh Ha-Cienco project5.

Subsequently, a number of shareholders of the Nam Dan Plaza project were convicted for misappropriating VND 49 billion in the sale of real estate shares in Nam Dan Plaza.

Accordingly, Trinh Xuan Thanh was sentenced to life imprisonment on "property embezzlement". On the same charge, many other defendants also received various sentences ranging from 6 to 16 years in prison.

Who watches TV, looks together, all the fun is how?

Screening of football matches at ASIAD, Lac Lac TV touched the hunger of Vietnamese fans. However, it is important to view this behavior from a legal point of view to clarify the responsibilities of each party.

USD billion Pham Nhat Vuong continues to do unprecedented business and contributes to overall development. Not only did the money not waste, it also caused the personal pocket money of Vik to continue to rise.

Automotive plant 1,200 robots, not the first in Vietnam

Automobile robots, bags and robots' trays … to maintain and even assemble … millions of robots from the factory are being replaced by people.

Thousands of coffins are confiscated, even excavated to be sold to wood mills to make new solid furniture.

"At the end of November 2015, I was shocked when I received an appeal from the TNG Court of Appeal that had indicted me for illegal transfer of TNG shares, based on allegations that I had forged the signature of Mr. Vu to" rob "TNS Company. "

T6, T1 or sweeteners are sold in the garden at prices ranging from VND70,000-110,000 / kg, but the cooperatives are no longer available for sale because traders have already paid them at the beginning of the season.

The room is on the first floor of a cool apartment block and has no staff, but you do not expect this to be a bank room where you can send, withdraw money and even make your own ATM.