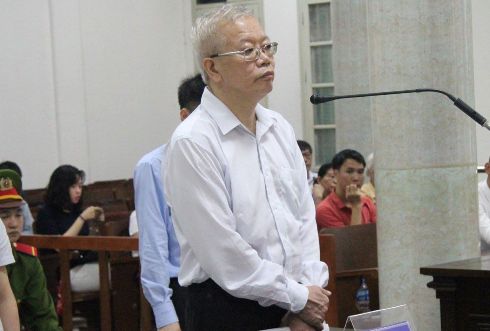 The defendants were informed and the defendants were sued in court for this trial by Tran Trung Chi Hieu (SN 1963) – former chairman of PVTEX; Do Van Hong (SN 1967) – former CEO, general manager of Petroleum Investment and Construction JSC Kinh Bac – PVC.KBC.

Then followed Dao Ngo Hoang (SN 1978) – Former Head of Contract Trading Department of PVTEX and Vu Phuong Nam (SN 1979) – former principal accountant PVTEX. All four suspects were accused of "knowingly violating the rules of the State of economic management that have serious consequences". In particular, the defendant Hieu was accused of "taking bribes".

Case files show, during the implementation of the project of housing for employees PVTEX, Tran Trung Chi Hieu and Vu Dinh Duy (now fled) decided to choose, signed contract with The contractors of the joint-ventures are PVC.KBC and HEERIM .PVC, while both members do not have sufficient capacity or experience.

Defendant Tran Trung Hieu responded to the interrogation during the trial.

In the advance and the use of advances, defendants have been guilty of acts of deliberate violation of the provisions of Clause 6, Article 17 of Decision No. 48 / ND-CP of the Government on construction contracts, which led to Resulting losses for the state over 19 billion.

Responding to the panel, Defendant Do Van Hong all wrongs such as indictment, also said actively in the statement, and overcome the consequences. "The best way is to report all issues honestly to the law enforcement agency," Hong said.

Duy and Hong united the charter capital of Kinh Bac PVTEX is 30 billion, of which Do Van Hong contributed 70% of the shares, corresponding to 21 billion and holding the position of chairman of the Board of Directors. PVTEX contributes 10% of VND 3 billion to the brand.

Remaining 20%, Vu Dinh Duy asked Do Van Hong to pay Duy and Hieu each person 10% of the shares, equivalent to 3 billion. Duy Duy & # 39; s wife thanks her sister Do Thi Thuy Linh; Tran Trung Hieu asked his brother-in-law, Tran Cuong, for the number of shares donated by Hong.

At the hearing, defendant Do Van Hong expressed the attitude of a sincere statement.

After this, the two defendants informed Tran Cuong and Do Thi Thuy Linh to withdraw the capital injected into Kinh Bac PVTEX. After receiving VND 6 billion in personal accounts, the two people had withdrawn the money to Duy and Hieu.

Before the court, the authorized representative of Petroleum Construction Corporation (PVC) approved financial investments in HEERIM.PVC – one of the two members of the joint venture contractor construction of residential construction projects for rolling PVTEX employees.

Specifically, PVC has more than 15% chartered capital in PVC.KBC. When PVC contributed capital in June 2009, PVC contributed 2.5 billion, equivalent to 250 thousand shares. However, when the president of the court asked the HEERIM.PVC headquarters, the representative said: "Previous address in Pham Hung Street (Hanoi), but now the company moved to the head office Also do not inquire about PVC".

"I do not know where my capital is going?", Asked President Tran Nam Ha. "We have a representative who manages the capital, as a company director, and if they do not report, we only take into account their administrative responsibilities, not the responsibility of the people.There is currently no claim that the investment capital of PVC is effective or not effective "- representative PVC.

"Our people were assigned to manage the capital, but now they do not know where they lead to?" – Chairman Tran Nam Ha commented and said that the panel sent a call to the HEERIM.PVC representatives to the site. Old but no results and do not know where the current address of the company is.

Another noteworthy content is the indictment and testimony of other witnesses expressed, PVC has sent the PVTEX approval for PVC. KBC may negotiate on behalf of PVC, enter into contracts with investors, carry out construction work and other work related to the package … However, the representative confirmed that PVC does not appear to have legal documents that allow, authorize or authorize PVC.KBC to do so.

The representative said: "PVC is not relevant", this is a PVC.KBC contract that is signed directly with PVTEX, not via PVC.

During the trial, suspect Do Van Hong declared "completely unaware of both PVN and PVC" before April 2009. At the end of April he was acquainted with Trinh Xuan Thanh (former chairman of PetroVietnam Construction Joint Stock Company – PVC) and participated in a number of ongoing PVC projects, including Dinh Vu polyester factory project.

Meanwhile, the dossier identified, on August 12, 2009, PVC and PVC.KBC signed a contract number 173 to perform a number of items under the Dinh Vu polyester factory. In the implementation process, Do Van Hong proposed and former chairman PVC PVC Trinh Xuan Thanh conditions for advance 25 billion in violation.

Van Hong is not used to carrying out contract work, but uses the 23.8 billion VND to buy 3400m2 of land in Tam Dao, Vinh Phuc, under the brand name PVC.KBC. Then Trinh instructed Xuan Thanh Hong to complete the procedure for PVC.KBC to transfer this land to Mai Phuong Company of Thanh family for 23.8 billion but paid only to PVC.KBC 20.8 VND billion, still 3 billion is still not paid.

In order to properly promote the wrong rules, Trinh Xuan Thanh led the procedure to convert 21 billion dong of advances into PVC money capital in PVC.KBC. The behavior of Trinh Xuan Thanh showed signs of crime Abuse of position and authority during the service, including the role of Do Van Hong.

Due to the expiry of the time limit for the investigation and the conditions for concluding this case in the same case, the investigating bodies will continue to investigate and verify on grounds of treatment in accordance with the legal provisions.

In turn, the former chairman of PVTEX Tran Trung Hieu said: "The loss of 19 billion, the main error of the contractor, is also not in accordance with the contract. On the PVTEX side the main error is the board of directors, of which Vu Dinh Duy is the managing director. "