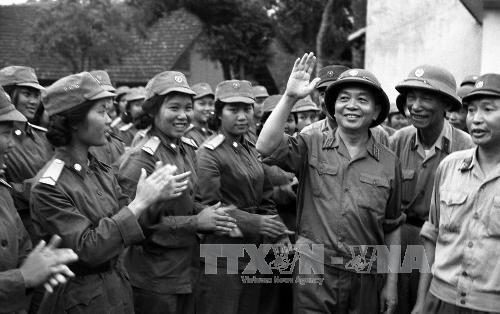 With the general's approval in the morning of 25/8, representatives of the provincial people's committee of Quang Binh, representatives of the district committee of the people Le Thuy, took footsteps on the resting place of general on the island of Vung Chua – Yen (district Quang Trach District) and take photos from the General Memorial House at An Xa Village, Loc Thuy Commune to the traditional home in cultural and sports center Le Thuy.

Special art program "Legendary song Vo Nguyen Giap" consists of 5 chapters: homeland, youth; The legendary general; General visits the countryside; Memories and ripples today. Throughout the program there were folk melodies by Le Thuy and songs of praise and gratitude from the general.

The program has contributed to the honor, preservation and promotion of the traditional cultural values ​​of the intangible cultural heritage of Le Thuy. At the same time, educating the younger generations to honor and sacrifice the great sacrifices of their ancestors' generations for the independence and freedom of the nation today, to preserve and advance revolutionary achievements. great and cultural values ​​of the homeland, the nation.