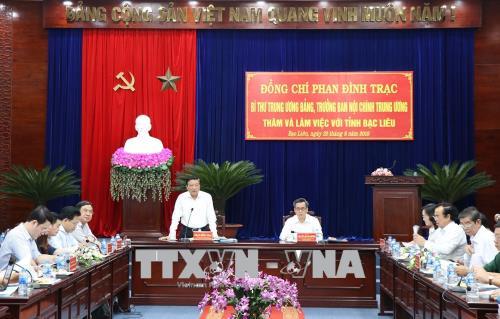 Speaking at the meeting, Mr. Phan Dinh Tac appreciated the results in internal affairs, anti-corruption, greatly appreciated; judicial reform; Regulate complaints and rejections of citizens in the province in the last 6 months.

The province in particular proclaimed documents, conducted the inspection work with party organizations, the policy and the decisions of the central and other departments implemented in a timely manner … creating a uniform awareness. synergy performs tasks in blocks.

In order to do well in the near future, Mr. Phan Dinh Trac suggested that the province should concentrate on strengthening the leadership of the party to ensure security and order in the province in accordance with Directive 46 of the Ministry treatment; Attaching importance to the inspection and investigation of corruption prevention and control, in particular the exemplary promotion of cadres and party members and responsibilities of the heads of agencies and units; To speed up the investigation, prosecution and trial of cases and cases involving corruption, in particular the long-standing cases that concern the public.

The province should also pay attention to improving the judicial reform and strengthening the organizational structure of the provincial party committee. Focus on solving complaints and petitions from citizens; Effective implementation of the 10th Politburo Conference on the continuation of the implementation of the resolution of the 3rd plenary meeting of the Party Central Committee (Xth Legislature) and Politburo-No 50 on improving the leadership of the Party with regard to to detection and treatment jurisprudence, corruption case.

On behalf of the Permanent Committee of the Provincial Party Commission, Bac Lieu Provincial Party Secretary Nguyen Quang Duong has taken over the management of Mr. Phan Dinh Trac and promises to instruct the authorities and sectors to seriously implement internal affairs, fight against corruption and judicial reform in the future.

In the first six months of the year, the province of Bac Lieu has taken good measures to prevent and combat crime, so that political security and social order are maintained. cadres and people have absolute confidence in the leadership of the Party and the State.

Specifically, the 6 months through the work of receiving citizens, dealing with complaints and convictions on the basis of their authority, the party committee at all relevant levels, directing good resolution.

Corruption prevention has been implemented effectively, and ensures transparency and transparency in the operation of agencies and units; Implement codes of conduct, professional ethics, change the position of cadres, civil servants and civil servants; transparent disclosure of assets and income; To treat the responsibility of the head when corruption occurs in the agency or unit.

In the first 6 months of the year, 5 cases of administrative violations were detected by means of the inspection, five people were requested and one case was transferred to the research bureau; The inspection committee at all levels, through inspection has discovered, disciplined under the authority 49 party members …