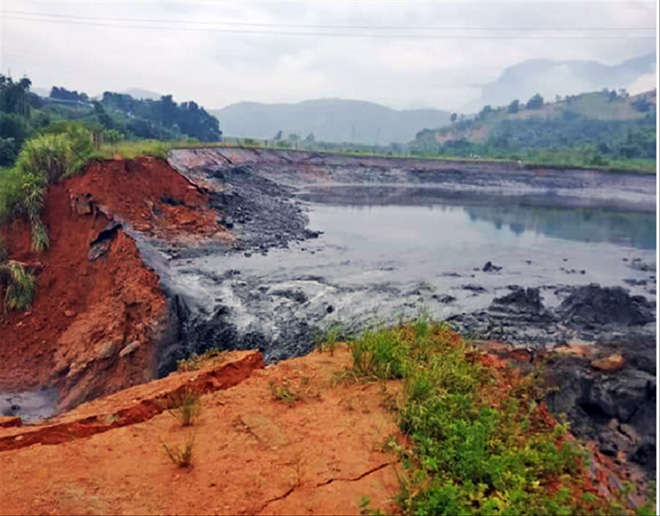 Break the dike because technical error?

According to the Ministry of Industry and Trade, around 12:30 on September 7, 2018, DAP No. 2 Joint Stock Company (Vinashem – industrial zone Tang Loong, Bao Thang district, Lao Cai province) thousands of cubic meters of wastewater, hazardous waste that ended up in the environment and in dozens of households in the municipality of Tang Loong and Phu Nhuan (Bao Thang district) has ended up.

According to the first information, as a result of heavy rain, the water rises in the reservoir, while the surrounding system is not safe to break, creating thousands of cubic meters of wastewater, overflowing toxic waste. in provincial road 151. The mud then flows to Phu Ha 1 and 2 villages (Commune Phu Nhuan) and the People & # 39; s Committee No. 7, Tang Loong Town, Bao Thang District, affecting 39 households. to the property of people in the area.

According to the Ministry of Industry and Trade, the first report shows that from 9 am on 7/9/2018 the company discovered a large leaking body and mobilized the forces to react. At 12.5 hours, however, leaks were leaked that led to about 45 m, the left-hand dike cover broke, estimated at 40,000 m3 The gypsum waste from the landfill ends up and passes the 151 provincial road to the flow of Ma Ngan. The water has swept away part of the house and utensils of two households and about 35 households along the provincial road 151. Now the right dike and part of the wastewater are still safe.

Cause of dike fracture, according to DAP report no. 2, the dike body has seeped as a result of geotextile lining that is exposed at the intersections. Water that has been absorbed for a long time to weaken the dike. DAP No. 2 The company has already identified sites that have been researched and have set up a project to build a reservoir of approximately 100,000 m3 in the adjacent area, is in the process of understanding the environmental impact assessment procedures for the project.

Prior to that, from 2/9 to 5/9, the district of Bao Thang heavy rain, the water level in the dike increased abnormally high, about 80 cm increase compared to normal, increase the pressure, appear cracks and excessive capacity of the dam, resulting in the breaking of the body part of the dam.

During the meeting with leaders of Vietnam Chemical Group (Vinachem), the leaders of the Lao Cai People Committee have coordinated the functional forces with the rescue services of DAP and a number of neighboring companies to protect the scene, help with the moving people and property to safe areas. Immediate support immediately 2 million VND for 35 affected households.

Lao Cai Provincial People & # 39; s Committee also asked the Vietnam National Chemical Group to steer and revise the dike dike system; To urgently build a dam reinforcement plan, build a reconstruction lake, to revise the design and dam structure to ensure the safety of gypsy waste plots. The Group must also cooperate with the Ministry of Natural Resources and the Environment and relevant ministries and agencies to supplement the environmental impact report for the gypsum site, including the reservoir containing approximately 100,000 m3.

Regarding the consequences of the collapse of the dam, Nguyen Phu Cuong, chairman of the board of Vinachem, said that the DAP Group No. 2 asked to compensate the affected households by breaking the bank. contains waste ore from DAP Plant No. 2 and coordinates with the local government to move 10 households in the vicinity of the directly affected stream from the danger zone. The remaining affected households will settle in the coming period.

According to Mr. Cuong, the Group also asked DAP No. 2 to re-evaluate the quality of dykes, to carry out the project immediately to draw water into the reservoir and to design an inner reservoir and process. Correct incidents thoroughly, ensure safety of new production.

To help people temporarily overcome the consequences of the incident, Vinachem also sent representatives to visit, encourage and support 39 households, affecting each family by 5 million. In addition, DAP Joint Stock Company No. 2 2 million VND per household.

It is known that the provincial people's committee decided at the end of July 2018 to impose a fine of VND 150 million on DAP Joint Stock Company No. 2 for 'improper management of environmental protection works at the landfill site: gypsum from dap factory 2'. The provincial People & # 39; s Committee also asked the company to take measures to prevent water from leaking into the environment.