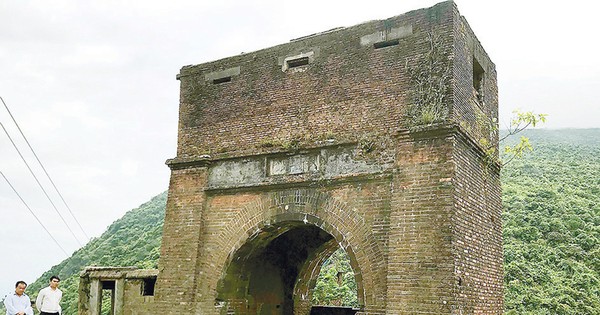 On 25 August, Huynh Dinh Quoc Thien, director of the Danang Museum, said that archaeologists from the National History Museum, the Department of Culture and Information of Da Nang City and the Center for Preservation of Ancient Monuments Hue have preliminary reports of excavation results Hai Van Quan .
With an area of ​​almost 900m² excavated on four sides of the citadel and in the heart of the relics, archaeological results have completely revealed the remains of the remaining architectural foundations of Hai Van Quan Nguyen, such as: level, the path of the two gates, the system of walls, cannons … along the architectural footprints of the house and Vu Khoi. In addition, excavations have uncovered many architectural remains built between 1946 and 1975 when the French and American troops were stationed there.

For archaeological remains of Hai Van Quan, archaeologists unveiled the First Gate of Heaven and Earth and follow the level, the path. This work is buried in the foot of the nail, so it is unclear to determine the size, structure and gate. However, with excavation results, at a depth of 1.4 m, all traces were revealed. The foot of the gate is also identified. The rectangular block is similar to Hai Van Quan. The gate is 7.9 m wide, 6.52 m high, 4.79 m thick; 3.347m wide, 4.55m high. The sandstone gate, the outer edge of the bed with the stones tilting up, followed by the compact stones compact with calcarers. In front of the gate is a large garden of 7.9 m, 7.1 m long, which is compacted with sand and small rocks, masonry mortar (0.2 m thick). This phase has undergone many stages of renovation, accretion. 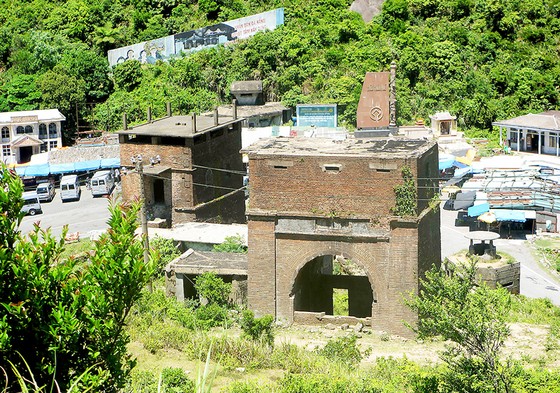 In front of the courtyard lies the path of the heavenly road from the capital Hue to the gate of the General Hospital, 4.8 meters wide, along the northeast to the mountainside of the west of Hai Van Son.

About 300 meters northeast of the gate, during archaeological research, archaeologists have also discovered the remains of the natural way from Hue capital to Hai Van Quan via THANH NHQ. The length of the sky from 2.6 to 2.8 meters, along the mountainside. There is also a trail of a lookout tower with a series of stone foundations. According to archaeologists, the area should further investigate and study further, there will certainly be more interesting information about the old path.

In the southwest of the gate the results of the excavation have also made clear the level of the level of the Hai Van Quan gate, the origin of the stone is 7.4 meters long, 5.5 meters wide, including 10 steps, each level 0.7 m wide.

Hai Van Quan Gate still has the structure of 6.45 m high, 7.9 m wide, 3.48 m wide fence, built dome vault, pedestal Thanh, sandstone floor. . According to the archives and archives of H.Cosserat and the castings on the Nine-Tails, however, the south gate is a level system that leads to the heavenly road.

In the French military period, the American garrison here, besides building more architecture on the roof of the gate, the level system for the gate was split and dug to create a new road to Hai Van Son.

The results of the excavation have revealed the level of tracks along the natural road south of Hai Van Quan. Grade-level rocks, 8.6 m wide coverage, the two sides of the mountain range of 0.65 m wide. Degree level straight down, connected to paradise. The natural line runs to the left of Hai Van Quan in the southeast. The remaining track shows the width of the road about 6.8 meters, the two sides are covered with mountain stone.

Archaeologists from archaeological evidence say that it is possible to determine the celestial line from Hai Van Quan to the south in the southeast, along the southern slope from Hai Van Son to Da Bay. (From current area).

Archaeologists have also discovered traces of secondary gate architecture and wall systems. The extra gate is a path down to the area that was previously built for the soldiers stationed in Hai Van Quan. The gate is built on the wall that connects Hai Van Quan with THDNHQ, the front of the walls of Hai Van Quan 3.9m. The path left only 3.08 m long foundation, 2.2 m wide, 1.8 m wide, pillars and floors are made of bricks. After the gates collapsed, the American army benefited from the construction of a concrete gazebo above the gate.

As far as the archaeological system is concerned, archaeologists define the role of defense fortress, the safety of crossing the archipelago of the North-South and of ships at sea, from Hai Van Quan to THĐNHQ a closed wall system has been built that covers the entire remnant area.

The results show that the scale of the walls of the Nguyen Dynasty was larger than that of the current wall. The walls are built according to the structure "upper limit down challenge", the foot of the nail 2.2 m width, the wall width 1.9 m, height 2.3 – 2.4 m is arranged by rock, the circuit.

Archaeologists have also found evidence of the artifacts, the architecture of the House of Representatives and the architecture of the Vu Khue house, as well as a number of relics, including brick, tile, porcelain and porcelain tiles. , glazed earthenware, terracotta and stone pieces of the Nguyen. In addition to the iron, stainless steel and glass items of soldiers of the French army, the United States.