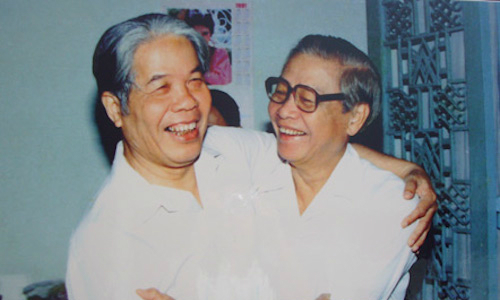 Former General Secretary Do Muoi died at 11.12 pm on 1 October in the 108th Central Military Hospital.

Protection Department, Health Care Central cadres said, in the time of illness, he was the party, state, collectively from professors, doctors at home and abroad dedicated care.

Former Secretary General Do Muoi was actually Nguyen Duy Cong. He is 101 years old, 78 years old, from Dong My commune, Thanh Tri district, Hanoi. Early revolution revolution, at the age of 19, he participated in activities in the Popular Front movement and joined the Indochinese Communist Party in 1939.

The former secretary general was trained during the war of resistance to save the country and the stages of construction, socio-economic development and national defense. In 1941, at the age of 24, he was arrested by the French colonialists and sentenced to 10 years in prison in Hoa Lo (Hanoi). Four years later, he escaped from prison and continued his revolutionary activities by joining the Ha Dong Provincial Party Commission, which led the general uprising to seize power there. After August 1945 he was secretary of the Provincial Party Commission of Ha Dong.

In 1955 he was secretary of the party committee and chairman of the military command of Hai Phong. In the 7th Central Committee (March 1955) he was elected deputy member of the Central Committee of the Party II. A year later he was appointed Deputy Minister for Domestic Trade and in 1958 he was Minister. He is also a member of the Second National Assembly of the Democratic Republic of Vietnam.

In September 1960, during the Third National Congress of the Vietnam workers' party, Mr. Do Muoi was elected member of the Central Committee of the Party. Eight years later he was in charge of the following functions: chairman of the State Pricing Committee, head of the Government Inspection Mission. From 1969 to 1971 he was appointed deputy prime minister and head of the prime minister's office.

In December 1976, at the 4th National Party Congress, Do Muoi was elected member of the Central Committee and deputy member of the Politburo, and remained Deputy Prime Minister for the period 1976-1981. .

In December 1986 he was elected to the Central Executive Committee, member of the Political Bureau and the Standing Committee of the Secretariat during the Sixth Party Congress. At the moment he was also a member of the VIII National Assembly. Two years later, the National Assembly elected him president of the Council of Ministers.

In December 1997 he was appointed advisor to the Party Central Committee by the Central Party Committee (Term VIII). He worked here until 2001.