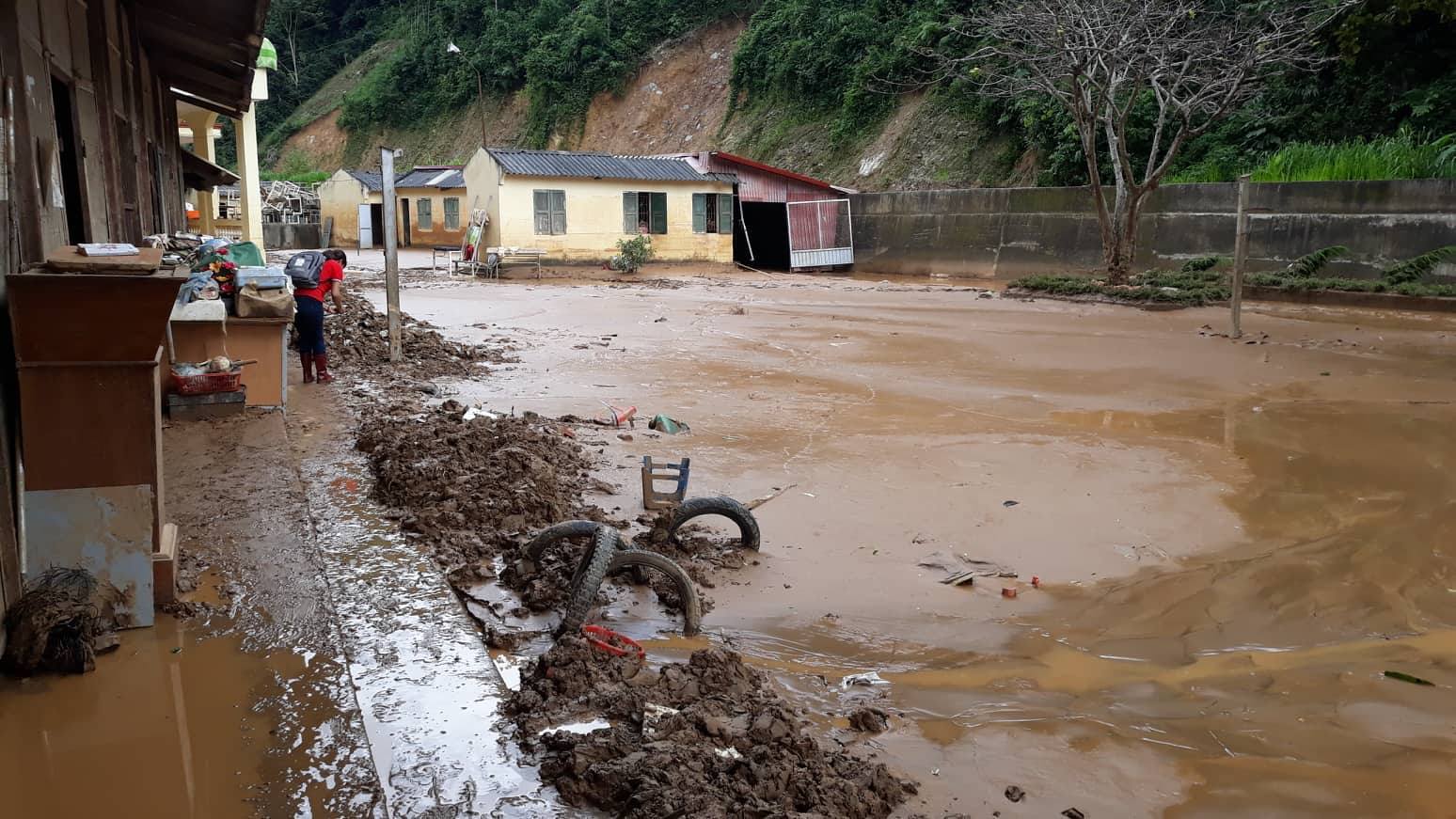 – Over the distance of more than 320 km from Hanoi, through the mountain bends along the slope, the landslide, where deep in the water, we arrived at the ethnic high school boarding school Na (municipality Na Ta, The district Mai Son, the province of Son La, where only a few days ago teachers and students had to lead the flood into panic.

Driving a few tens of kilometers, the convoy must stop waiting for the road or "heart" when it is not fast enough when it travels slowly to overcome floodplays such as waterfalls, landslides or signs. labyrinth shine.

"Companion" the way to go is the big blocks of trees, the cinnamon trees all the way, long stretches flooded deep in the flood, …

The rice is divided, the game is not enough to let the flood run

The ethnic high school boarding school is one of the schools affected by the recent flood in Son La.

The first face that struck eyes upon arrival is the four-sided school yellowish reddish color of the flood.

School grounds such as fields, mud that drifted into the overflowing water, the garden, thicker than 2 gangs and noisy, no longer covered another field when the functional forces to mobilize the excavator continued to work.

In classrooms and libraries, teachers pump water, scrub the floor, sweep the classroom, and push the mud out of the classroom. The stack of books that teachers can play in the new school year is now muddy, wet.

Even according to teachers, the school only had to take care of the second flood a few days after the flood was cleared.

Tu Thi Thu Ha, her teacher, leaned against the wall and said:

"After the flooding on August 28, the school was assisted by people and police, supporters and cleaners.After 2 days to complete the housing of students, classrooms and areas to the equipment of the school library, came on 30/8 floods suddenly back and all the work returned to the same as the old, there is more and more thick ground on the school grounds. "

She shared the teacher because she felt helpless before the disaster struck her.

"The location of the school is not very convenient, the teacher's mind is always ready to cope with the floods, but has never experienced a major flood like the past, that day the rice has just been divided, the students have not eaten or even run the tray to run everything, but hope to escape the flood. "The teachers sang repeatedly students running to the second and third floors to prevent flooding and then had to ask the local authorities to study as a teacher.This time we other floods have not yet ended, we are a little discouraged, but then you still encourage each other to try to overcome, and hope that the students can start the day, "she said. .

Students are allowed to start their studies on September 5th

Nguyen Trung Huan, the schoolmaster of the school shared the highest water level at 3m height. He was sad when all teaching materials, computers, books in the library and the school's laboratories were swept away or destroyed and the total damage estimated at more than 2 billion.

In preparation for the new school year, according to teacher Huan, the consequences for the school are approaching, so that students are assured of school and study.

Especially the greatest wish of all teachers is to open the children to 5/9.

"From 28/8 to now, no teacher is equipped, 5 mud sled today, September 2 is the only Independence Day, but the teachers are still in school to overcome and we are determined to try September 5 for the children, "said Huan.

Over the past few days, the ethnic high school boarding school of Na Ta Secondary School has also received support from the military, police, youth volunteers and district education and training together to cleanse and overcome the mud. the consequences of the flood.

On 1 September, Minister of Education and Training Phung Xuan Nha went to every damaged classroom to encourage and share with school teachers.

The Minister expressed the wish that the local authorities could help him clean up his toilet and supplement sufficient equipment and books to enter the new school year 2018 – 2019 from 5 September.

On 1 September, the Minister of Education and Training Phung Xuan Nha and his delegation visited the school in Son La, where a few days ago teachers and students had to run the flood.

The clip shows scenes from teachers and students at Na Na High School (Na Ta Commune, Mai Son District, Son La Province). The floods were recorded by the school teachers themselves. far away.