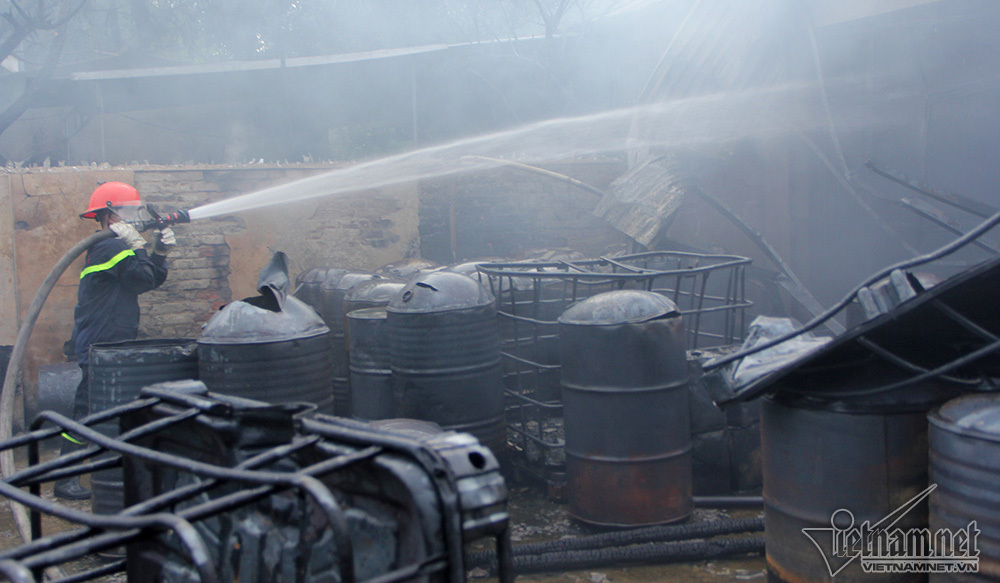 – The basic fire has been checked for more than 18 hours. A car and motorcycle are burned down. The whole workshop was seriously damaged …

The fire took place this afternoon at 4:20 pm in the paint shop of about 200m2, but only after a few minutes of fire they quickly covered the entire factory chain. Residents said that when the fire broke out, they heard three big bangs, the same chemical smell. Smoke clouds of dozens of meters that are located a few kilometers can be seen.

12 fire trucks were mobilized. Because the fire is too big, the rescue work is difficult. The police must destroy the wall to get deep into the workplace. In addition, many soldiers had to use water sources from the river and the lake to fire.

Head of the police station No. 13, police Nguyen Tien Nam Hanoi said: When firefighters are present, the fire has spread. Firefighters have concentrated on cooling using foam fire technology to extinguish the fire.

The fire caused the workshop consists of two burned houses, a car parked along the road also completely burned, in the frame. There is no record of human loss.

Because the fire scene is adjacent to the Thang Long avenue, hundreds of vehicles that drive through here have to stop.

Black smoke rose from the tallest building in Vietnam

The fire broke out around 1540 hours at Lanmark 81 Building on Nguyen Huu Canh Street in Ho Chi Minh City.

The fire came from a painting workshop in Hoai Duc and then intensified, accompanied by high smoke columns.

Passenger car fire in the streets of Saigon

Fire in the Diamond Plaza building, guests that are scattered at night

The fire on the third floor of the Diamond Plaza building allowed many people to walk away.