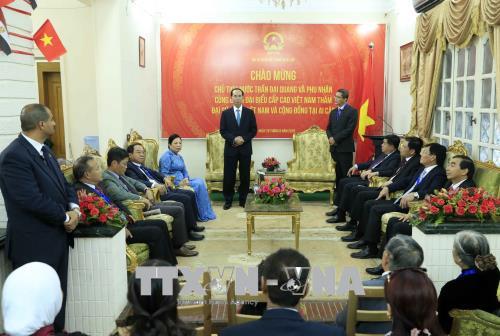 On 26 August at local time (the same day in Vietnam), President Tran Dai Quang and his wife and Vietnamese delegation visited the embassy of Vietnam in Egypt. Make a good conversation with civil servants, staff of the embassy, ​​agencies next to embassy and Vietnamese community who live, work and study in Egypt.

Vietnamese Ambassador to Egypt Do Hoang Long has reported to President Tran Dai Quang about the situation in Egypt, successes in political affairs, cultural diplomacy … and the situation of the Vietnamese community in Egypt; Thank you to the trust and recognition of the Party and the State for the results of the activities of the staff of the Embassy and other agencies alongside the Embassy of Vietnam in Egypt.

Ambassador Do Hoang Long claimed that all officials and employees of the embassy and other agencies will continue to work in a positive, active and responsible manner alongside the Embassy of Vietnam in Egypt. To fulfill the assigned tasks, contribute to the development of relations between Vietnam and Egypt, meet the convictions and expectations of the party, state and people.

Representatives of the Vietnamese community in Egypt expressed his pleasure and honor to welcome President Tran Dai Quang and his wife and his delegation to visit Egypt. The people living in remote areas of the country often follow the country's performance in the renovation process, keep traditions, Vietnamese culture, help each other to stabilize their lives, contribute to the country. host country and relations between Vietnam and Egypt. The community expressed gratitude for the attention of the party, the state, the embassy's embassy through the activities to give Vietnamese children the opportunity to meet, share in every major holiday, Traditional Tet holiday of Vietnamese people . People from the community want to continue to receive the attention of the Party and State to give people more confidence in life, looking forward to supporting the opening of Vietnamese language lessons to preserve the mother tongue, the culture of the homeland.

We are delighted to talk with officers and employees of the embassy, ​​agencies next to the embassy and representatives of the Vietnamese community in Egypt, President Tran Dai Quang praised the efforts of the Officials and staff of the embassy and agencies besides the embassy have the external task that has been assigned by the party and the state, and contributed to the active promotion of relations between Vietnam and Egypt. The president is pleased to see that the people in Egypt are always connected, supported and well integrated in the host country; We believe that every Vietnamese in Egypt will be an ambassador, contributing to the promotion of the country, culture and people of Vietnam, and improving mutual understanding between the two countries.

President Tran Dai Quang said that due to appropriate policies, Vietnam has managed to maintain stability in terms of social and economic development. The macroeconomic indicators in 2017 are positive: economic growth reached 6.81% (7.08% in the first 6 months of 2018), the highest in 10 years, the highest growth category in Asia and worldwide; Sales of imports and exports reached a record high of $ 425 billion; The total foreign direct investment (FD) reached $ 35.88 billion, an increase of 44% compared to 2016, the highest level in 10 years, with paid-out capital of $ 17.5 billion. The partners pledged to provide more than US $ 3 billion in ODA to Vietnam in the period from now to 2020; Tourism reached a record number of 12.9 million international visitors, an increase of 29% compared to the previous year. To date, Vietnam has signed 13 Free Trade Agreements (FTAs), 10 of which have entered into force. Vietnam has recently acceded to the Comprehensive Partnership for Trans-Pacific Partnership (CPTPP) and continues to strive to increase trade and investment abroad as a driving force. Ways and innovations in domestic growth.

At a foreign level, President Tran Dai Quang confirmed that Vietnam continues its foreign policy of independence, autonomy, diversification and multilateralization to maintain and maintain a peaceful environment. pot for development. The APEC High Level week in November 1977 was considered a great success in the foreign affairs of Vietnam, with the participation of all 21 leaders of the member economy in the context of important countries, policy is changing. The relationship between Vietnam and its partners remains deep, stable and sustainable. In its foreign policy, Vietnam always attaches great importance and wishes to extend its cooperation with African countries, including Egypt.

On relations between Vietnam and Egypt, President Tran Dai Quang stressed that Egypt was one of the first Arab countries to enter into diplomatic relations with Vietnam (in 1963) and opened an embassy in Ha Noi. Inner (1964). Egypt is the first North African country to recognize Vietnam as a full-fledged market economy in November 2013. Egyptian President Abdel Fattah El-Sisi made a state visit to Vietnam in September and is the first high-level visit between the two countries.

Bilateral political relations have blossomed, Vietnam and Egypt have regularly exchanged views, views and mutual support in United Nations fora. Egypt supported the candidacy of Vietnam for a non-permanent member of the United Nations Security Council for the period 2020-2021 and assisted Vietnam in two rounds of displacement of unemployed people in Libya in 2011 and 2014.

As far as economic cooperation and other areas are concerned, Egypt is Vietnam's fifth trading partner in Africa. In 2017, bilateral trade turnover reached $ 346 million, the two parties had a target to reach the intended trade turnover in the coming period to $ 1 billion.

About the direction of the mission of the embassy, ​​the agencies next to the embassy of Vietnam in Egypt in the coming period, President Tran Dai Quang proposed to further promote the Vietnamese agencies in Egypt. Strength and performance, efforts to study, monitor and evaluate the situation of your country to advise the party and the state specific measures to strengthen ties between Vietnam and Egypt.

President Tran Dai Quang confirmed that the policy of the National Party's big party and the State is to create favorable conditions for the Vietnamese community abroad to stabilize and integrate their lives in the country's society. At the same time you help the community to preserve and promote national cultural identity towards the home country.

President Tran Dai Quang wished all officials and staff of the embassy and agencies alongside the Embassy of Vietnam in Egypt to unanimously and proactively fulfill and continue to fulfill their duties. promote the exchange of people between the two countries, actively contribute to the establishment of national construction and defense; I wish that all people unite, stay together, embrace each other in life, always to the motherland.