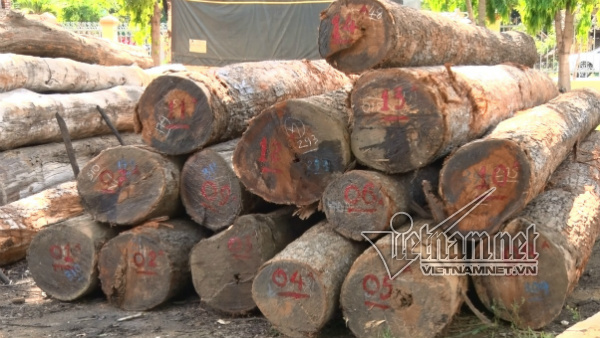 – The head of Dak Lak's provincial FPD has handed 8 m3 of undocumented timber to the investigating body.

Y Sy H & # 39; Dok, director of Dak Lak Provincial FPD, has just confirmed to VietNamNet that he has transferred 8m3 of undocumented police to the Dak Nong police.

According to Mr. Y Sy, this is the number of wood purchased by Mr. Bui Van Khang (HKL) of the district of Cu M & # 39; gar arrested for the involvement of Phuong "bearded forests").

Y Sy said that because of the family's need to build a wooden house, his wife asked some of the leaders in the area to buy wood. In April of this year Mr. Khang (then head of the HKL District of Buon Don) the help.

"I asked my wife about the paperwork, but Khang was instructed to bring the wood to the front, the papers do it, I think the wood has a hammer, buys liquidation and then has legal papers. my wife Khang asked 2-3 times for paperwork, but not for long time, "Y Sy said.

According to Y Sy, the research agency went to his house last Saturday to work.

"The number of wood without this legal document, the family has voluntarily seized the investigation agency.Then, if the number of legal timber is returned to the authorities," – said Y Sy.

Mr. Y Sy did not know about the value of wood because his wife asked directly from Khang.

Khang told my wife, "I have a place to buy wood for you." Especially my wife is bankrupt, I am working on the agency should not care, "- said Mr. Sy Sy.

Answering the PV question about Mr. Khang who buys undocumented paper from April 4, 1818, and the police said that the supply of illegally harvested timber by Phuong was the reason why the family did not pay early, Y Sy said. "Listen to my wife, bought Khang from the auction, bought by foresters, so I think this is legal, but who thinks so?"

Mr. Y Sy also said, about the return of wood, he reported in the agency briefing briefings.

"I went to work, asked the brother who is involved, most people do not say involved or received money.It still has to wait until the police investigation has decided," – said the leader of Dak Lak Provincial FPD.

As VietNamNet has informed, the police of the Dak Nong police station have urgently arrested Bui Van Khang (SN 54 years old, head of the district HKL Cu M & # 39; gar (Dak Lak province) to investigate the receipt of dozens and 50 -year-old Phuong "beard", living in the district of Cu Jut, the province of Dak Nong.

Researchers have established that Khang incorrectly certified many forest products for the company Thao Truc and Phoenix "beard" at the time of 4-9 April 2017.

In return, the company Thao Truc and Phuong "beard" Khang gave dozens of wood with hundreds of millions.

Earlier, on the morning of April 27, the Environmental Police Department (C49), the office of the CSDT (C44, Ministry of Public Security) coordinated the authorities of Dak Nong province, picked up two trucks from Phuong "" Nearly 40m3 transported illegal wood.

Researchers camped in the 464 sub-area of ​​Yok Don National Park, close to Border Patrol Station 747. At the same time, the force also carried out an urgent search for timber stores. In Phu Juy, Phuong has illegally seized hundreds of wooden pieces without legal papers.

Seven defendants were prosecuted to investigate violations of the rules for exploitation, protection and management of forests. Among them Phan Huu Quyen (brother of Phuong "beard") and Le Van Chinh escaped and searched.

Wood car from Phuong boss "beards" welcome in the forest, past a series of posts, border guard, ranger like no one.

According to the Forest Protection Department, the area of ​​illegal logging in the border belt, managed by the border guard, must coordinate and warn the foresters who want to control the forest in advance.

Yok Don National Park has reported to the General Department of Forestry and the Dak Lak Provincial People & # 39; s Committee on illegal logging in the park management area, adjacent to BP 747.

Dak Lak Border Command said that the Ministry of Public Security illegally arrested timber in the border area managed by the unit.

Phuong "bearded" bean and other accomplices were arrested on the grounds of the violation of the rules on the exploitation, protection and management of forest products.