The school year 2018-2019: Thanh Hoa overcomes the consequences of rain for the new school year 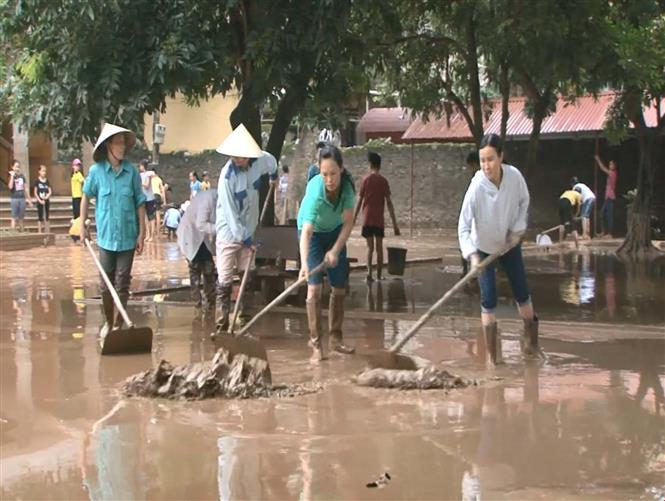 According to the reporter, in the municipality of Vinh Yen, the worst flooded area of ​​Vinh Loc, immediately after the water abstraction, more than 100 officers and soldiers of police, army, fire prevention and fighting were mobilized together with Teachers, parents and students to provide cleaning of 3 schools (kindergarten, elementary school, primary school).

After three days of isolation, hundreds of tables and chairs lay under the ground in these schools, covered with thick mud. Due to the sludge layer on average 20-30cm, where the height is up to almost 50cm, the cleaning work is quite difficult.

In the recent flood, because of the low-lying area, the primary school of Vinh Yen was flooded and flooded to 3 meters. A large amount of mud and land has been brought here. Floods caused most of the school's facilities to be soaked in water. Looking at the tables and chairs, the study materials of the students were damaged, everyone felt very sad. Nobody told anyone, everyone started to repair, clean up with the desire for children, grandchildren can quickly go to school when the new school year is approaching. Firefighters have used large nozzles to help the school clean up the mud. As a result, on 2 September afternoon, the cleaning work at the primary school in Vinh Yen commune was basically completed. In the next one to two days, the working group will continue cleaning up on other campuses in the hope of quickly completing the work for students to enter the new school year.

Nguyen Quang Minh, a 5B student from Vinh Yen Commune, Vinh Loc District, said: "From mid-August we have prepared the performances, teams, but because of flooding We have to wait until school is cleaned so that we can come to class if it new school year begins. & # 39;

Nguyen Thanh Dung, headmistress of Vinh Yen Primary School (Vinh Loc district), said: "Because of the flood, the school did not have time to return, although she had also mobilized the staff to clean the students' desks. all computers, books, utensils and learning materials to the high places The floods have caused almost 3,000 books, school supplies, computers, desks and chairs, damaged documentary cabinets, especially school grounds with large subsidence, gardens and bonsai on campus. Schools and functional branches are urgently cleaned up, overcome the consequences of rain, but the school can not organize the opening of the right time because everything is so messy, so much work has to be done. 9 students to go to school.

Located in the main flood area, so few days of heavy rainfall, Cam Son Secondary School (district of Cam Thuy) was submerged from 1 to 2 meters deep. Once the sprint, the school has mobilized teachers, students actively tidied, sanitation school to prepare for the new school year with the motto sprint to clean up to organize there. Everywhere is thick and muddy, making cleaning more difficult and difficult. Teachers, parents and members of the youth union had to bring buckets of water, brushes and wipers to clean all corners of the school, classrooms, stones, tables, chairs … for students.

Ms. Pham Thi Hang, director of the Thanh Hoa Ministry of Education and Training, said: "Before the erratic flooding of floods, Thanh Hoa education sector is rapidly overcome consequences for students to return to school peacefully; It also keeps the situation in the eye to ensure the safety of students on their return to school.

The Ministry of Education and Training of Thanh Hoa has set up working groups with local authorities to visit schools and families affected by flooding. In the coming days, the Department will mobilize all staff and teachers for a 1-2-day salary to support students, schools that suffer losses; At the same time, we appeal to benefactors and companies to support schools damaged by floods.

According to a report from the education department of Thanh Hoa, the recent flood has led to the flooding of 13 schools in the province, six schools affected by landslides, two shelters for students buried. In addition to efforts to overcome the effects of floods and floods, provincial education is actively engaged in the discovery of damaged facilities to timely repair, supplement and prepare the best conditions for students. entered the new school year.