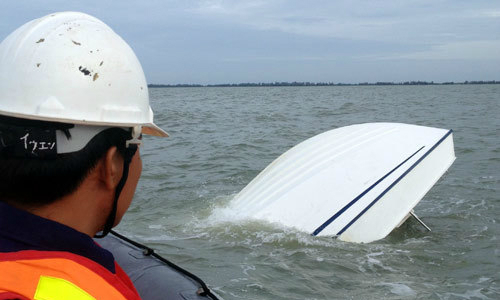 On 5/9 HCMC Police completed the investigation into the sinking of the boat in Can Gio district 5 years ago, and continued to demand the prosecution of Mr Vu Van Dao (48 years) and Dinh Van Quyet (36 years old). ) – Former director of the Joint Stock Company and the joint stock company of Vung Tau Marina for the culprits Use of unsafe transport vehicles for water.

This step was taken after the research agency identified the ship BP 12-04-02 as inland vessels; The design files and registration dossiers at the Marine Registry Department and the purchase and sales agreements show that the vessels are not used for passenger transport, which only transports 12 people and can not operate at sea.

"The cause of the accident was that the ship carried more people than allowed, abused and was not allowed to operate in the sea of ​​Can Gio area," the authorities said.

Accordingly, the research bureau said that Mr Dao and Quyet carried passengers along the waterway from Tien Giang to Vung Tau – without permission from the competent authorities to transport inland waterway passengers. The use and functioning of the means on the certificate of technical safety and environmental protection. This is breaking the law.

Mr. Dao instructed the staff of the Viet Czech Company and the Marina Company to use 3 ships, including the ships in distress. And Mr. Quyet directly contacts PV PIPE to unify passenger transport, report and lead the island. So they are responsible for the consequences.

According to the contents of the case, the end of July 2013, the plant for the production of steel pipes under the joint-venture for the joint production of oil and gas pipe production in Vietnam (PV PIPE Company, headquartered in Tien Giang) ship game. Factory manager for staff contact him Decide the program and the number of participants to arrange the shuttle train, hotel reservation. The incident was reported to him, Mr. Dao.

On the evening of 2 August 2013, Mr Dao sent two ships from the Border Guard to collect employees from the PV PIPE Company in the province of Tien Giang. The ship picks up the workers who run to Vung Tau.

About 19 hours pass by the sea in Long Hoa commune, Can Gio district, the number BP12-04-02 with 30 people (loading 12 people) was sunk 9 victims died. Cause is determined by the number of passengers allowed (more than 18 people), travel to the area is not allowed to work …

The investigating authorities then prosecuted Mr Dao and the decision. The People's Procuratorate of Ho Chi Minh City approved the results of the investigation and completed the indictment, bringing the case to court. However, the court returned the file and asked the appraiser to clarify the conclusion that the BP12-04-02 caused an accident with or without safety when it was taken into use.

In August 2015, the Ho Chi Minh City police temporarily suspended the investigation into the BP12-04-02 ship inspection case. At the moment, Mr. Dao numerous petitions to the central government, claiming that he and Mr. Quyet were not under the accusation of the crime investigated. The conclusions of the assessment do not determine the cause of the accident.

In June this year, the authorities decided to restore the investigation after the Maritime Bureau of Vietnam had made a third assessment conclusion for BP12-04-02.

"From the moment of the incident it took me a lot of work, this is just a traffic accident, but it is not finished yet, so it can not be assumed that the investigative body laid the foundations." On the other hand, the person conducting the procedure article 13 of the Code of Criminal Procedure 2015 not applied to the principle of the presumption of innocence, "Mr. Dao said.