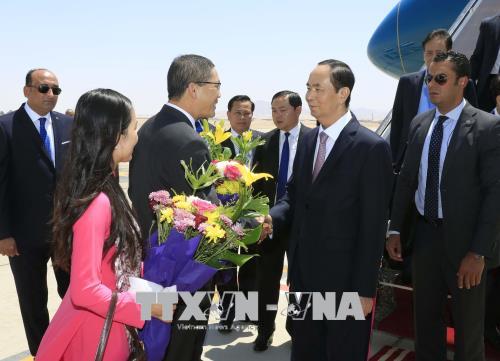 According to the Egyptian newspaper, President Tran Dai Quang and the Vietnamese High Delegation arrived in Luxor and a state visit to the Arab Republic of Egypt started a four-day visit at the invitation of President Ai View Abdel Fattah El Sisi.

President Abdel Fattah El Sisi and President Tran Dai Quang will hold talks in the capital city, Cairo, with the anticipated focus on opening new prospects for cooperation between Ai Vietnam and in many areas such as politics, economy, trade, investment, culture and education .

State visit to Egypt by President Tran Dai Quang is the first official visit by the head of state to Vietnam since the two countries have concluded diplomatic relations in 1963. Egypt is one of the first Arab countries to maintain relations with Vietnam.

According to the Egyptian state line, President Tran Dai Quang expressed his satisfaction with the state visit to Egypt on the occasion of the two countries that held the practical activities of 55th anniversary. Formal diplomatic relations. "The Vietnamese people will never forget the support that the Egyptians gave to Vietnam in the struggle for independence," said President Tran Dai Quang. Earlier, but also in the construction and development of the country today. We are always interested in looking, sincerely congratulating the great achievements that the state and people of Egypt have achieved in recent years, which has caused Egypt to become one of the three largest economies in Africa, a growing role and influence in the region and in the world. "

President Tran Dai Quang said that the potential and opportunities for cooperation in the area of ​​Vietnam and Egypt are very great. With the determination of the senior leaders, the active participation of ministries, sectors, locations, companies and people of the two countries, the friendly relations between Vietnam and Egypt will continue to play Vividly in both breadth and depth. The Egyptian newspaper also recalled the official visit of Egyptian President Abdel Fattah El Sisi to Vietnam in September.