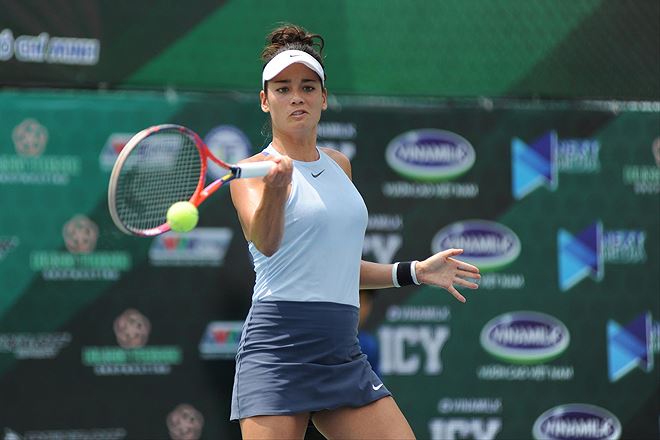 Alize Lim (HCMC) defeated Fodor Csilla (Da Nang) 2-0 (7-5, 6-2) and won the VTF Pro Tour. 2018. After the game, the new champion said: "The last game is the same, this is indeed a difficult game for me if the opponent is a good player." She (Csilla) excelled in the first series, often, but I think she in the second set a bit tired and I grab the chance to win Csilla is a strong player and I am very happy to play with her. "

Previously, Alize Lim showed superior strength in losing a game on the way to the final. Frenchman Nguyen Phan Yen Tich 2-0 (6-0, 6-1) in the first round, victorious General Nguyen Thi Be Xuyen 2-0 (6-0, 6-0) in four for winning straight Phan Thi Thanh Binh 2-0 (6-0, 6-0) in the semi-finals. The matches of Alize Lim usually last only half an hour.

Not only that, Alize Lim in pair final match with Phan Nhu Quynh (HCMC) also won convincingly with 7-5, 6-0 for pair Nguyen Tu Ngan and Nguyen Thi Be Xuyen. army).

Alize Lim was born in France in 1990 with a beautiful appearance, a Vietnamese father and a French mother. Overseas Vietnamese competes four times in the Roland Garros round, from 2014 to 2017. She reached the highest ranking of 135 WTA rankings in May 2014 and now stands at the 321 world.

Alize Lim is first known in Vietnam for playing tennis at ASIAD in Indonesia in August. However, the French overseas Vietnamese are really prominent during the VTF Pro Tour 2018.

Doan Quoc Cuong, general secretary of the national tennis federation in Vietnam, said that VTF Alize Lim participated in the Vietnamese tennis tournament early last year when she returned to play for the Vietnam Challenge. After much persuasion, Alize Lim and his family agreed.