Pham Duc Huy was tested for doping because of running … well 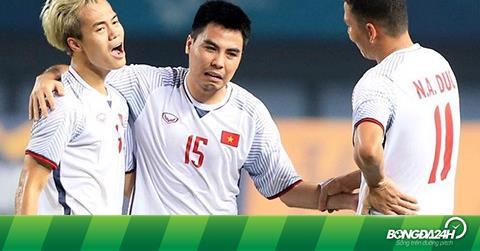 In the recent Syrian Olympic victory, the Vietnamese midfielder Pham Duc Huy was tested for doping.

"Prince" is held to check doping

Back to position ASIAD quarterback defense, Pham Duc Huy played very well, successfully blocked opponent's counterattack and made a contribution to Vietnam's victory. As a result, the Park Hang Seo teacher made history, with the first place in the semi-final ASIAD with national football.

But while the whole team returned to the hotel to celebrate the victory, the versatile player from Hanoi was saved by the BTC for doping controls. Duc Huy completed this procedure for more than an hour after he witnessed the tireless running during 120 minutes of play.

In line with Quang Hai in the middle line, the "Arab Prince" took the lead only on defending, filling Van Hau's position and regularly helping with long passes. Opposite a Syrian is a very good physical advantage, but the midfielder still plays well and fulfills his duties.

Sharing about reluctant, Duc Huy said, "I am very happy with the entire team's victory, and doping tests do not have any problems, that's just the procedure required after every game." At this moment, the spirit of the whole team is very bad. enthusiastic, ready to participate in the semi-final with the Korean Olympic Games. "

Because of the durability, Duc Huy was checked for doping. But on the social network he has the apple to share: "Just try to commit the crime of running a lot, eat now with the bath ready." Frankly, in this game I was sick for the fight, only in the spirit. # 39;

After this victory, the Vietnamese Olympic has only one day off, before the semi-final with South Korea tomorrow. And the fans only hope, the team continues to show the spirit of fighting and again "put to the test" doping because of "bad health".