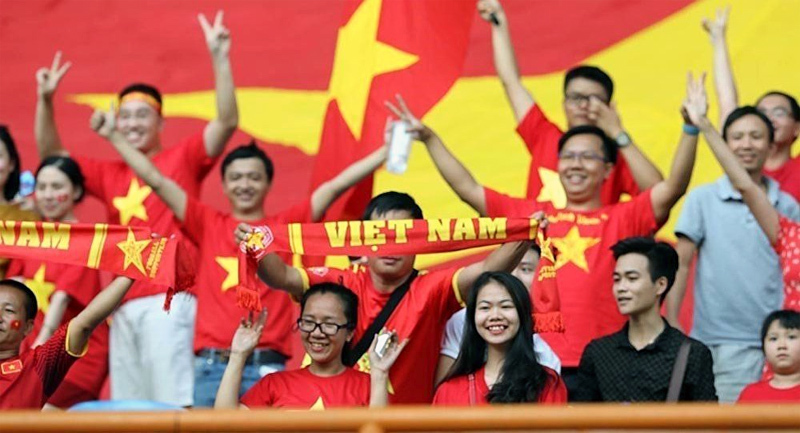 As soon as the team from Vietnam reached the quarterfinals on ASIAD 18, many fans willingly spent more than ten million to fly to Indonesia to fire the team. The football tour is organized in a hurry, while the air cancels the trip to Indonesia.

Nguyen Thanh Long (Hanoi) lost his fortune last year to buy tickets to support the U23 Vietnam team while playing in Changzhou, China, due to weather and travel difficulties. This year, when the team from Vietnam reached the quarterfinals on ASIAD 18, he joined the group that went online to buy a plane ticket, but the price of flight tickets Hanoi – Jakarta was quite expensive, more than 10 million, still not. Includes accommodation, traveling, buying tickets to watch football.

That is why the group decided to buy tours from travel organizations, with an average price of 11.9 million (from HCM City) to 16 million (from Hanoi).

The difficulty faced by tour operators, however, is that there are very few direct flights from Hanoi, Ho Chi Minh City to Jakarta, most of which are in transit in Singapore, Kuala Lumpur or Bangkok. That is why passengers will take longer instead of 4 hours of flying.

That is why travel agencies have worked together with airlines partners to open more direct flights.

Some travel organizations also work with Vietnam Airlines to organize charter flights to watch football during the day. In particular, guests fly directly to Hanoi – Jakarta in the morning, & # 39; in the evening to cheer football and night to the airport to return home. Departure from yesterday on Monday 27 August at the airport of Noi Bai and on 28/8 at 05.30 hrs.

If the fans are from Hanoi, the price ranges from 14.5 to 14.9 million per person, including flight tickets, meals, quarter tickets, shuttle cars, direction guides, travel insurance and cheerleader costumes (jacket, size, bandroll).

Representatives of travel agents such as Vietravel, Hanoi Redtours, Hanoitourist, Ascend Travel … said they have opened guided tours. In some companies, the number of visitors increased. Even the company immediately reduced 500,000 per guest for early registration before 10:00 am on 25/8.

Meanwhile, when the flight from Ho Chi Minh City, the tour price is soft, only 11.9 million per person. According to the travel agency TST, the company prepared to lose 50 seats for the fans directly to Indonesia. Time is not much because many people come to ask.

To meet the influx of Indonesian football fans, Vietnam Airlines said it arranged two non-stop flights from Hanoi to Jakarta and added a round trip to Jakarta, bringing the total number of flights from Vietnam to Jakarta on 27/8 to 4 flights. All these flights are operated by Airbus A321.

Still, according to Nguyen Cong Hoan – deputy general manager of HanoiRedtours, the airline looks at all reservations to calculate the plan to add more places when the Vietnamese team is in the semi-finals. From now on visitors can deposit, reserve seats for the semi-finals and finals.

Vietravel also opened the tour semi-final tour, starting from 29/8, with the price of 15.9 million. "When the Vietnamese team reaches the final, the fans rush to Indonesia to cheer, so we have drawn up a plan to serve the fans," the company said.

Donald Trump suddenly got too frightened

In the context of increasingly tense relations between the two countries, President Trump could start and take steps to deal with it.

VTV6 must stop broadcasting in Vietnam and Bahrain, what did VOV say?

Between the first half of the Olympic Games in Vietnam and Bahrain, the first since ASIAD 18, VTV6 has been forced to stop broadcasting due to copyright infringement.

For his younger brother to leave his office, Bau Duc fluctuates unexpectedly

At a price of up to 300 million m2 the store is advertised as "picking money" is a rich hunter. Many projects burn and rise in a short time.