Why did two fire engines spray a strong tornado when the plane landed with U23 Vietnam? Two fire engines approached and sprayed the rainbow rainbow when the plane landed the U23-Vietnamese plane at Noi Bai airport. Rainbow rainbow beautiful when the aircraft carrying U23 Vietnam landed in Noi Bai.

Around 2 pm this afternoon (2/9) the flight with the sports delegation in Vietnam and the U23 players took part in ASIAD from Indonesia, landed at the airport of Noi Bai. Thousands of fans have been waiting for the athletes to resign.

When the plane landed, the players were still in the huge crowd of spectators. They saw how two fire engines approached the rainbow rainbow and splashed into the air.

Doan Minh Quan, deputy director of the North Vietnam Airport Authority, said: "It is a special ritual to welcome the Vietnamese delegation, which is being requested by Vietnam Airlines."

According to Quan, this ritual is called Water Salute. This spraying is often used in cases such as welcome or good-bye flights of special significance; or carriers when launching a new flight.

In addition, the etiquette of Water Salute is used in cases such as when a superior retired captain; when an airline closes and that is the last flight. 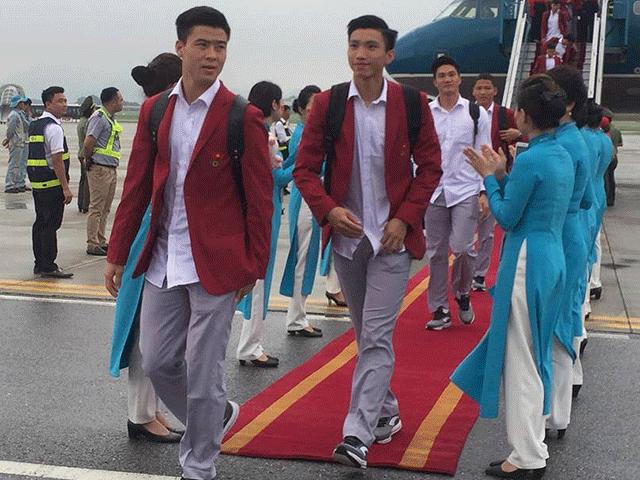