Archaeologists find a vampire burial & # 39; site of a child that is feared to rise from the dead

zimbabwe October 15, 2018 Health, zimbabwe Comments Off on Archaeologists find a vampire burial & # 39; site of a child that is feared to rise from the dead 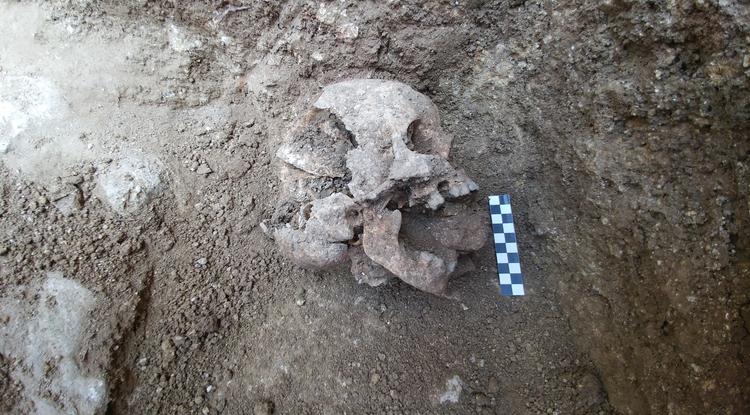 In a miniature grave, in the middle of what used to be a vast Roman villa, is the skeleton of a 10-year-old child who died more than 1500 years ago. It is on his side, his mouth is agape and filled with a limestone rock the size of a large egg.

Researchers believe that the child, whose sex is still unknown, died after a fatal outbreak of malaria in the fifth-century community that once inhabited this small medieval town on a hill about 60 miles north of Rome. The stone had teeth marks, leading archaeologists to believe that it was deliberately put into the child's mouth after death – a bizarre, old practice to prevent the child from rising from death and spreading the disease.

Archaeologists have this kind of funerals & # 39; vampire tombs & # 39; called. Locals in the Italian Lugnano in Teverina call it the Vampire of Lugnano & # 39 ;.

"We know that such an unusual treatment usually indicates a fear of the undead, especially a fear that the dead would come back from the grave to continue spreading diseases among the living." The placing of the stone in the mouth of the child is a literal or symbolic way to turn them off, "said Jordan Wilson, a bioarchaeologist and a doctoral student at the University of Arizona who was part of the team that picked up the remains in the summer.

The discovery is the last of a dozen relics found in La Necropoli dei Bambini, or the cemetery of the baby, a deserted Roman villa that was turned into a huge graveyard for children somewhere in the middle of the fifth century. . A community on the border between paganism and Christianity, horrified by dead they could not explain, resorted to witchcraft and ritually buried their children, said David Soren, a University of Arizona, regent professor who oversaw archaeological excavations on the site in the last three decades.

These discoveries offer a view into a terrified society that is being bombarded with a deadly, unknown disease. Archaeologists say it paved the way for the end of the Roman Empire and even kept the barbaric ruler Attila the Hun from ending his invasion in Italy.

"It must have been a situation where you do not know what is happening, you have no idea … where you almost desperately try something and listen to everyone who can come up with an answer," Soren said. "It's just really creepy."

Soren said he first heard about the cemetery in 1987 when he was working on another project on the island of Cyprus and was invited to visit Lugnano in the Umbria region in Italy – the center of witchcraft during the Roman Empire. There he saw what was left of the villa, about the size of a modern shopping center. They found relics of a pyramid-shaped dining room, slave houses, a ceiling that sloped on four sides, paintings and wall mosaics. In the midst of sand-covered trenches, the remains of infants, toddlers, and aborted fetuses buried next to raven claws, toads, bronze cauldrons filled with ashes and sacrificial puppies.

Archaeologists call these "deviant funerals" or the old way of burying people who were afraid of having supernatural abilities such as coming back from death, or those who have violated the rules of society, Wilson said.

& # 39; They sprinkle honeysuckle everywhere, & # 39; said Soren. "There are all those magical rites that happen around it, which makes this cemetery so fascinating."

Soren and his team of archaeologists have since excavated 51 children's remains that have been proven by biomolecular tests to have died of malaria and fetuses that are believed to have been doomed before birth. The oldest child so far was the 10-year-old whose discovery was announced last week. Researchers did not do any further analysis to determine whether the child had died of malaria, but the evidence of an abscessed tooth, a side effect of the disease, suggested that this was the case.

Near the grave of the child was the body of a 3-year-old girl, archaeologists say. Her hands and feet were covered with stones – another form of a vampire funeral to keep evil away. She too had died of malaria.

The urbanized Roman empire was a cesspool of diseases that spread through contaminated food and water. Marshes were a refuge for mosquitoes and created a mature environment for malaria that had not been discovered until the 19th century.

Lugnano is not the only site for vampire tombs. In Venice, in the north of Italy, an elderly 16th-century woman, buried with a brick in her mouth, was discovered in 2009, called the "Vampire of Venice". In Northamptonshire in England, about 75 miles north of London, a man from the third or fourth century was found last year, a stone where his tongue had been.

But beyond these bizarre discoveries were human beings who lived in fear, Wilson said.

"It's something that I've been thinking a lot about when we worked on this project, it seems that people are confronted with the unknown, it's been a very common reaction throughout our history to respond with fear," Wilson said. "I feel really deep for this community that had to deal with this epidemic when they did not understand it."

And caught in the middle of this fear were the children who died from the pain.

"It's good to remember that when you find something like that, this was a real person who had suffered and left a family," Wilson said. "However exciting it is for us to find something like this and to view it from a scientific point of view, it is important not to forget the humanity of the situation."