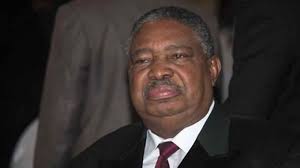 PREVIOUS Vice President Phelekezela Mphoko's daughter-in-law has been arrested for allegedly ordering 15 Choppies Supermarket managers in Bulawayo to illegally distribute more than $ 30,000 in cash from their POS machines after threatened with expulsion or dismissal.

Nomagugu Mphoko (36), who was initially jointly in charge of her husband Siqokoqela, appeared to Bulawayo magistrate Ms Sithembiso Ndlovu yesterday against 49 counts of extortion. She was taken pre-trial detention until September 3 on bail of $ 200.

As part of the bail conditions, Nomagugu was instructed not to interfere with witnesses of the state.

Persecution, said Mr. Nkathazo Dlodlo sometime in June of this year, where Nanavac Investments acted while Choppies Zimbabwe issued to all its supermarket managers a directive against cash distribution from sales to individuals whose scheme was to replace the equivalent by sweeping on Point of Sale machines.

The court heard that Nomagugu went to the complainants between 13 and 29 June this year, some of whom were Indian nationals, and demanded cash in which they also threatened to have them dismissed or deported if they refused to comply.

Then she guarded the equivalent of the money received with various bank cards.

"If the suspect is informed of the directive against such transactions, he would threaten the shopkeepers with loss of employment and deportation from Zimbabwe, and would also tell the complainants that her husband is the owner of the company and that she is merely a worker. are under his authority ", said Mr. Dlodlo.

The court heard that the complainants, as a result of the threats, acceded to the demands of Nomagugu and gave her the money.

"The accused person has obtained the advantage of having easy access to cash, which is difficult to obtain, and resulted in losses for Nanavac Investments, because the company's stores rely heavily on cash to pay critical suppliers, including arranging foreign payments with local banks, said Mr. Dlodlo.

The cash collected illegally by Nomagugu from the 15 stores amounted to $ 30,230. The money was looted on several occasions by Choppies stores in Bulawayo's Central Business District, Luveve, Pumula East, Entumbane, Bellevue, Nkulumane and Lobengula suburbs.