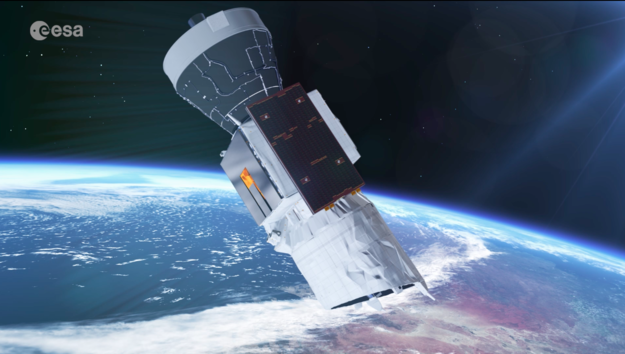 Yesterday, a British made satellite that was launched in space with powerful Vega rocket from French Guiana at 18:20 local time after a 24-hour delay. The Aeolus spacecraft carries powerful laser technology that can trace the movement of air particles and also records wind and behavior at world level. The satellite should be launched Tuesday, but ironically, the launch was moved to Wednesday after the European Space Agency (ESA) discovered the wind at high altitudes that the satellite might throw and it would get confused.

The satellite called Aeolus, based on Greek mythology, where Aeolus is the god of the wind. The spacecraft was launched aboard the Vega rocket and carries a Doppler wind member system that is an advanced laser system. It shoots pulses of high-energy laser into the ultraviolet spectrum that enters the atmosphere and when it hits air particles, molecules, it spreads and on the basis of which the engineers could analyze the data to determine the direction of the wind at different heights as well as complete wind predictions for the medium distance.

From now on we have different technologies to calculate the different variables of the wind, such as weather balloons, swirling anemometers, and satellites that predict how wind and its behavior are based on data they collect by following clouds in the sky and more. But all these systems have limits that can be overcome with the help of the new satellite that ESA and the European Union (EU) have launched together within the framework of the Copernicus project.

The satellite is located 320 km above sea level and will scan wind patterns and behavior from the ground to nearly 30 km above sea level which is the stratosphere. This would allow the satellite to predict the weather predictably well. According to a report published in BBC, Sun sheds all of his energy into the tropical areas of the earth that affect wind patterns and wind circulation in the atmosphere, which is then spread in different directions. Aeolus can help predict the weather, both in the trophic area and beyond, where it can increase the accuracy of weather forecasting by 2-4 percent when it is outdoors and up to 15 percent in the tropics.

How is it that this type of satellite was not launched before, you might wonder? The answer is, Aeolus' history dates back to 1999 when it was first approved by the ESA with a planned launch in 2007, but the engineers had problems adjusting the ultraviolet laser to be mounted on the satellite to work under the circumstances that it will experience in the job. After years of development, ESA and EU were finally able to develop Aeolus with Arianespace, an Airbus branch, that needed a few years to materialize.

Moving further, the launch finally happened on Wednesday, August 22nd. But this is a trail mission that would eventually be lost in space or would say, swinging to the atmosphere and destroying itself when it almost comes to the end of its life. ESA has stated that it would not fund a follow-up mission after Aeolus, which means that other companies could take the mantle of producing and launching the next-generation Aeolus satellite once this current mission has been successful. Countries like China and the US may also be interested in financing such a mission.