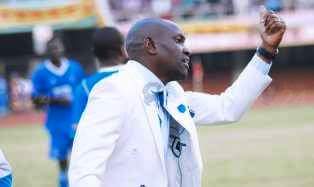 Dynamos head coach Lloyd Mutasa was disappointed yesterday after his match was not in the match against Yadah Stars.

Mutasa has expressed concern about the poor performance of his team prior to Sunday's derby clash against the bitter old enemies, Caps United. Dembare was limited to a goalless draw of Yadah.

The Glamor Boys were poor in the park and their nasty performance manifested themselves in frustration with both fans and players when defender Marshal Machazani got a straight red card after being admitted that he deliberately stamped on Simba Sithole.

"There is no coach who wants a bad show in a derby, everyone would want to go in the background of a moral boost, we thought we were going to build on our performance against ZPC Kariba, but we should not," Mutasa said.

"It was really frustrating to play against a team where players were losing turns, they did everything they could to kill the rhythm of the game, but that's football, we'll take that point and prepare for the next matches. "