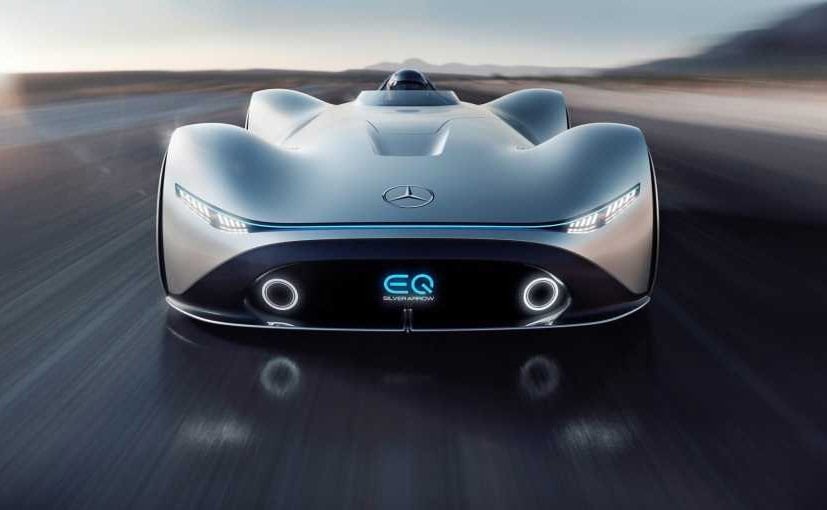 The EQ Silver Arrow with one seat is a tribute to the successful record breaking W 125 car from 1937.

Mercedes-Benz unveiled the EQ Silver Arrow show car during the Monterey Car Week. The EQ Silver Arrow with one seat is a tribute to the successful record-breaking W 125 car from 1937. The streamlined silhouette of the 5.3 meter long and one meter shallow single seater looks absolutely stunning and futuristic. The body structure of the showcar is made of carbon fiber. The multiple layers of paint in Alubeam Silver appear as liquid metal on the surface and represent the opposite elements of design: hot and cold. Functional fastening parts such as the pre-splitter are made of carbon fiber. The side skirts also have a lighting strip and the large recessed EQ lettering for the rear wheels. Other highlights are the cockpit for the driver, which can be folded forward and the partially detached multi-spoke wheels. The non-rotating hub caps and the partial trim on the wheels are other stylish highlights. The 168 spokes per wheel are made of lightweight aluminum and have a rose-gold color, which is also a characteristic of the EQ brand.

Gorden Wagener, Chief Design Officer at Daimler AG, said: "More than 80 years ago, the historic Silver Arrows demonstrated that Mercedes-Benz was a pioneer in terms of speed, thanks to, among other things, its streamlined shape. heritage: intended for acceleration and driving enjoyment, it embodies progressive luxury and offers an insight into the future of our design, with the result that the showcar drives the design idiom of our new EQ product and technology brand.

The EQ Silver Arrow has smooth 255/25 R 24 tires at the front and 305/25 R 26 tires at the rear. Tire Pirelli has pressed a star pattern on the tread. The rear diffuser is reminiscent of motorsport with two extendable rear spoilers that act as an air brake by increasing the wind resistance when delay is required.

The interior of the EQ Silver Arrow combines timeless aesthetic appeal with a futuristic vision. When the driver's cockpit is folded forward, it offers a view of the surprisingly wide interior. There is saddle-colored real leather on the chair and handlebars, brushed aluminum throughout the interior and solid walnut with darker softwood strips on the floor. It also gets high-tech solutions such as the large projection surface for the panoramic screen and innovative solutions for user experiences, such as the virtual race option, which represents the visionary character of the EQ.

The driver of the EQ Silver Arrow is surrounded by a large panoramic screen on which a 3D image of the surroundings is projected from behind. As an indicator for future possible charging technologies, the lane of the lane on which inductive charging is possible is placed on the screen. With the help of artificial intelligence it is possible to participate in a virtual race against historical or current Silver Arrow racing cars. A virtual race circuit is laid on the real roadway via the panoramic screen and the driver sees their opponent in front of them or behind them as a "ghost". The assist function of the Virtual Race Coach helps improve driving skills by giving instructions during the race.

(The EQ Silver Arrow Concept has a usable capacity of 80 kwh, allowing a range of more than 402 km)

The driver can select, via the touch screen, the driver's programs such as Comfort, Sport and Sport +, which offer different driving characteristics. Sound settings can also be configured here: choices include the sound of a current Formula 1 Silver Arrow or a Mercedes-AMG V8 engine.

Of course, the EQ Silver Arrow is an electric vehicle with a capacity of 738 hp. The thin, rechargeable battery in the bottom has a usable capacity of about 80 kWh and allows a range of about 402 km / h. Ventilation openings on the side help cool the battery.